The man veteran Notre Dame Head Track Coach Joe Piane calls “The Gentleman Coach” shares his insights into how to succeed at track and field and cross country as an athlete and as a coach. Bob Smith has experienced track as a Central High School and University of Notre Dame athlete, then as Riley High School coach and later as Notre Dame assistant coach. From sports washout to the Olympic Trials, from student to teacher and coach, his story shows the triumph of hope and perseverance. The book is more than a memoir. It covers every aspect of the sport from the tribulations of a beginning runner to the insights of a master coach. Many area track athletes and coaches are mentioned and/or pictured in the book. The appendices give statistics for years of area and regional competitions. Joe Piane, awardwinning head track coach at the University of Notre Dame for over 30 years, has written the foreword, giving his views of track as a sport and its potential to change lives, encourage growth, and prepare a person to succeed in life.

Why did you write this book?

I have always been a “keep track of things and record keeping” kind of person, and I had a good source of meet information of my own plus newspaper clippings. Shortly after my retirement from teaching in 1989, I developed Parkinson’s disease, and I needed something that I could do – some kind of project – to help me cope with the Parkinsons’ mentally. Writing the book seemed to fit the bill, as it would also utilize my stored resources.

You had many successes running track. What was the biggest highlight of your career as an athlete and why?

I didn’t have just one. It would have to be one from high school and another from college, because in achievement, they weren’t even close. In high school, I only ran two years, and going from “nothing” to winning the State Sectional in three events (including the relay) the second year had to be the biggest highlight. At Notre Dame, it is really tough to choose – in fact, I can’t. There were three races that stand out. One, running the 100 in 9.6 in 1948, winning the 300 yard dash at the Michigan State Relays, and winning the 220 at the Central Collegiate Conference in Milwaukee in 1949. The weekly competition at Notre Dame was so tough that any time I won was an accomplishment.

What was the hardest thing you had to overcome as an athlete? How did you overcome it?

Just getting a chance. This was especially true in sports other than track. You overcome by working hard and not giving up. In track, work hard enough that you would be difficult to ignore. This is the nice thing about track – you go out and “beat ’em.”

What was your high point as a coach?

In high school, it was Riley’s cross country team winning the Conference meet in 1956. At Notre Dame it was the track alumni reunion in 2006.

What would you have done differently as a coach?

Coaching high school, I probably should have worked the boys harder. It was found through experience that young athletes could take more work than when I was in school. I think that is one of the factors that make track results so good today.

What would you tell people who want to compete in track and field today?

Go for it. Opportunities abound – set your personal goals, and enjoy yourself. 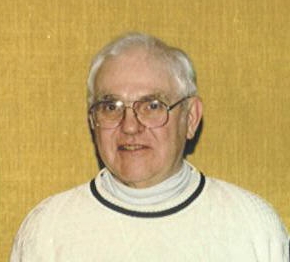 Robert C. Smith was born in South Bend, Indiana in 1927 and has lived there all his life, except for his time in the navy. He lived in the same house from birth until his marriage in 1950. He attended Muessel School from kindergarten through ninth grade, went on to Central High School, and got his Bachelor of Science degree in Physical Education from the University of Notre Dame in 1950.

While at Notre Dame, he won four monograms in track and was named Notre Dame All-American in 1948. He is a Monogram Club member. His senior year, he served as team captain, the first South Bend resident ever elected to that position.

He graduated from Indiana University in 1953 with an M.S. in Education, with additional graduate work at Purdue and Indiana University. He spent two summers working at the University of Notre Dame in the Biology Department, doing research with the Mosquito Genetics Project.

Bob Smith was head track and cross country coach at Riley High School in South Bend before serving as assistant track coach at Notre Dame for 16 years. In 1995 he was inducted into the Riley Athletic Hall of Fame as a coach.

Bob taught for 39 years in the South Bend School Corporation: 29 years at Riley High School and 10 years at Jackson when it was a high school. He taught General Science and first and second year biology. He served as Science Department Chairman at both Riley and Jackson for a total of eighteen years.

Keeping Track: Success in Track and Field is an overview of his experiences as an athlete and coach.